Where it came from; were it is and where it is going.

The term “early adapters” may not come to mind when you think about e-cigarettes or vaping, but the world of technology is not that much different. For those that may be unfamiliar with that term, here is a picture, since it speaks 1000 words:

In the world of technology, from radio to cars to television, then computers, VCRs, DVDs and every alphabetic combination you can think of, there are those that are curious and lead new products to market until it becomes a commodity and eventually falls off. The best real life scenario that we are witnessing TODAY is laptop computers which were once a luxury, then a requirement and soon will be more or less obsolete due to Ipads and tablets. It is the way of the world. Music CDs have fallen into that same empty hole.

Vaping is following that same pattern and in just a few years it has become not just an early adapter curiosity and toy, but is now becoming mainstream. The arrow above shows where we are currently in this adaption process. I do not foresee any technology replacing e-cigs and vaping so they will probably not follow this pattern till the end, but should show steady rise until who knows when. There should be no DROP at all. Currently we see the Innovators and Early Adopters tapping into the movement and now we are getting close—but not at—Early Majority.

Just a few years ago e-cigs were difficult to find, now they are at Costco. Vape Stores, once a rarity, have increased ten-fold in Southern California over the past two years and are creeping across the country, going very strong in the South east and East coast and now circling back into the Midwest. The Bible Belt. The land of Wal-Mart, soon to carry juice as well as e-cigs. Can you say mainstream??

Here is the breakdown of where the demographics of the Vape market was,where it is and where it seems to be going.

Millennials 60% of the market 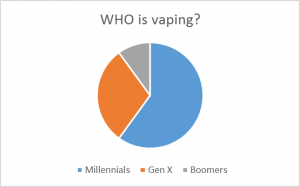 NOTE for future reference:
The Millennials will lead the overall market, grow in SIZE, but drop in percentages as the older demographics start tapping into the movement. Currently this industry is at $2B annual revenue and Big Tobacco predicts it will outpace tobacco sales—currently at $35B—in the next ten years. Conclusion: the balloon will swell in size, but proportions will change. 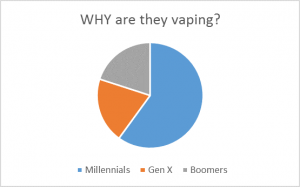 WHY are “they” vaping?

Millennials: It’s cool/ fun/ hip 60%
Gen X : want to smoke (probably) but don’t wish to create second hand smoke (possibly because of children) or offend 20%
Boomers want to quit smoking, may have been trying to quit for decades 20%

WHO is smoking WHAT? E-cigs vs. vaping and mods: 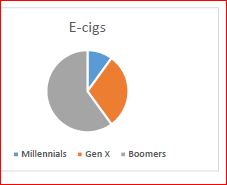 Note: Millennials don’t consider e-cigs as cool as mods so they are not as popular due to the lack of variety and novelty.

Vaping (and the future) 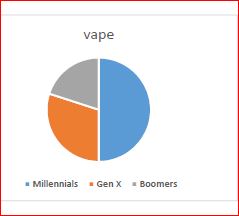 50% Millennials
NOTE: Millennials will continue to dominate this sector since Gen X and Boomers do not have the patience, visual acuity, manual dexterity and curiosity to get heavily into the vaping line.

Where there’s NO SMOKE, there’s Vape!

The map shows the direction of Vape Shop growth. Starting in California and immediately hitting the East Coast, it has become very heavy in the Southeast and is now coming back to Middle America. 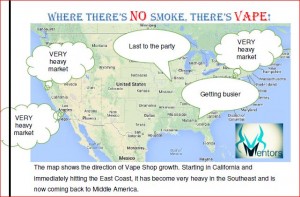 Questions? Comments? Always like to get feedback and your thoughts.